All breeds of cats are unique and special, but if you are one of those who like those that are somewhat larger and also have dark and long fur, the Nebelung it is one of the most beautiful.

In addition, although it is not very well known yet, it is an ideal furry for almost any family due to its sociability. Do you want to meet her?

The Nebelung, or long-haired Russian blue, It is a breed of cats native to Europe, but some specimens were brought to the United States in the XNUMXth and XNUMXth centuries. There, two Russian blue cats were crossed: Siegfried and Brunhilde, which were two that had longer than standard hair. But Cora Cobb, the owner of the cats, wanted to maintain the characteristics of the kittens that had been born, so she contacted the geneticist of the American Cat Association, who encouraged her to continue the study.

Fortunately, the Russian Blue breeders from the International Cat Association (TICA) revised the standard to describe a unique breed, much like the Russian blue that everyone already knew, but with a medium-length coat of hair.

Physical characteristics of the Nebelung

It is a medium-sized animal, with a muscular body. The coat is semi-long, being longer on the tail. The color is Russian blue, slightly lighter on the bottom. The weight of the female is between 3 and 4kg, and that of the male between 4 and 6kg. Their life expectancy is 14 to 18 years. 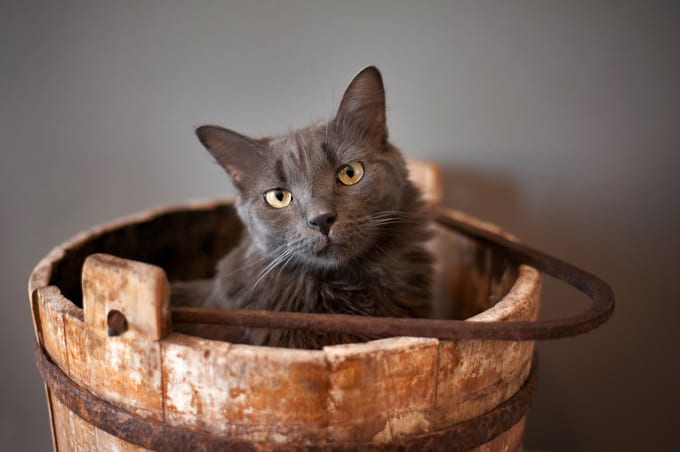 If what you are looking for is a domestic animal, affectionate, calm and playful, you will undoubtedly find it in the long-haired Russian blue. It is the typical cat that enjoys hanging out on the couch with its family, but also having fun while playing with humans and / or other furry ones around the house.

In addition, it is very intelligent, so much so that it can be taught to walk with a harness -from a puppy, yes, and only if you live in a quiet area-, and some tricks such as giving the leg. The only thing you have to keep in mind is that, like all these felines, likes (actually needs) to follow a routine to feel safe.

Avoid changes as much as possible, especially if they are abrupt, noise and tension. In this way, you will have a feline that will be very comfortable in your / his home.

It is carnivorous, like all members of the Felidae family, so it is necessary to give him a diet based on meat, either natural food or feed. In the event that you choose to give him homemade food, I recommend consulting a nutritionist veterinarian beforehand as the lack of nutrients could lead to serious health problems. And if you choose to feed it, read the ingredient label and discard those with cereals, by-products and flours.

It should not lack water either, but since cats do not usually drink much from the trough, it is highly advisable to buy a fountain or automatic drinker. From experience, I can tell you that it is one of the best cat investments that we can make as caretakers that we are.

There is nothing sadder than seeing a bored cat. He spends the day in a corner, and only moves to drink, eat and go to the sandbox; perhaps also to do things that you wouldn't normally do, such as attacking people's feet, biting and / or scratching them. The worst thing is that he does not do it with bad intentions, but often because of this he ends up being abandoned.

As her family, you will have a responsibility to keep her from feeling this way. And how? Well, it is actually very simple: playing with him an hour a day, in short sessions (10-20 minutes). Uses cat toys, never the hands, and try not to make sudden movements (it is a predator, take advantage of it. Turn the toy into its prey and move it as such).

While your health doesn't have to deteriorate, it doesn't hurt to examine your body from time to time for any strange lumps, or anything else you shouldn't. What's more, it is mandatory to give him a series of vaccines when he is a kitten, as well as the microchip.

On the other hand, if you do not want to breed it, it is best to castrate it at 5 or 6 months of age. In this way, not only will you not have unwanted litters, but you will not have to worry about heat or what it causes (in cats, fights, leaving the home, absences for several days, etc .; and in escaped cats, and the possibility of not go home in a couple of months if you get pregnant).

All three alike. If one is missing, coexistence can never be good. The screams, the blows, not spending time with him,… all that will break the cat, from the inside. It will make you feel terrible, and you will not have the life you deserve. This is why an animal is not (or should not be) a whim or a gift to anyone, because not everyone is willing to take care of it during all the years that it can live.

But if that is not your case, that is, if you really want and have a stable economy (keeping it in condition costs money, in the same way that you also have to spend it on taking care of a child or ourselves), then do not hesitate 😉 .

Curiosities of the Nebelung

To finish, I will tell you that this breed of cats appeared in the American program Animal Planet Cats 101, as well as in the movies Pound Puppies and The Legend of Big Paw y Garden State.

It is difficult to get it outside the United States. Ideally, ask at pet stores in the area, or look for a kennel. The price is between 400 and 600 euros.

And ready. So far the special of this beautiful furry. I hope you liked what you have read.

Get the latest articles about cats.
bool (true)