Black cats, once hated, are now adored by so many people, including myself. Their soft and shiny fur, their enigmatic gaze and their very special character make them incredible companions. But what race do they belong to?

If you want to know what are the breeds of black cats, in Noti Gatos we will tell you. So don't miss it 🙂.

Black is a color that humans often attract a lot of attention, but unfortunately it is often associated with the negative. Comments like "I see everything in black" tell us that this person is going through a very bad time in their life. But is it the same with black cats? Are these animals bad luck?

Living with one of them is having an incredible and wonderful experience. It is knowing pure love. They can be quite rebellious during their youth, but what cat is not at that age? I will never tire of repeating that color does not make the cat, but I have met several miniature panthers, in fact now I live with one, and the truth is that they have a special character. Once adults they are usually very calm, peaceful, affectionate and adorable.

Therefore, the breeds of black cats that you should know are:

El american shorthair cat It is a breed native to the United States. Its body is of medium size, covered by a short, thick fur that is hard to the touch. which can be any color: white, blue, reddish, cream, brindle, ... and also black, weighing between 6 and 8 kilos. 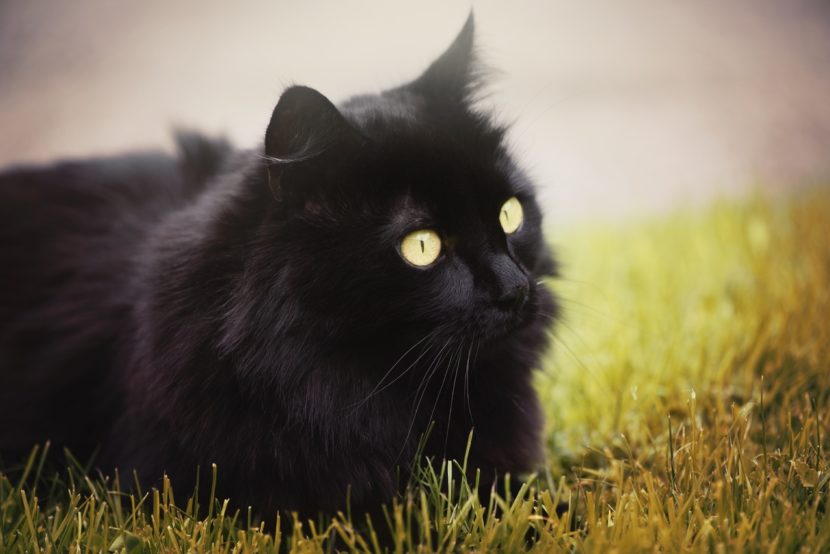 El Angora it is one of the oldest cat breeds. Already in the XNUMXth century aristocrats wanted to live with one in their homes, because at that time they only knew a cat that had long hair. Weighs between 3 and 5 kilos, and although the breed can be of different colors (white, tan, brindle, etc.), it can also be black.

The Bombay cat is the quintessential black cat breed. Its body is protected by a layer of hair that is only black in color, and on its head it has two beautiful round and well separated eyes.. It is muscular, compact and of medium size, weighing between 3 and 7 kilos, being the smallest females. Do you want to know more about this breed? Click here.

El european common cat it can be of any color: white, orange, brindle, bicolor, ... and of course black. From the time it is a puppy until it reaches old age, it has soft, shiny hair, of an intense black color and very healthy, but as it ages, its hair loses its shine.. It is easy to find some white hairs; For example, my cat Benji has some on his neck, around his throat, and my cat Bicho seems to have been born gray 🙂, as he has some on his back and neck. It can weigh between 2,5 and 7kg, the female being smaller than the male.

The Maine Coon is a medium-sized, muscular cat, weighing between 3,6 and 8,2 kilos, the females being smaller. Its color can vary a lot, but brown tones stand out, and even black. It is believed that it is originally from Maine, in the United States, where the Angora cats from Turkey arrived from the princess of Austria called Marie Antoinette, who escaped the problems that France had in the late 1700s.

El Persian cat it is one of the most popular breeds. Its flattened head and its long and soft fur have made it one of the animals most loved by all, as its character is very special. He lives great in a flat, and being quiet, he does not need to do as much exercise as, for example, a sparkler. It can also be of various colors, among which is black, and weighs between 3,5 and 7kg.

What is the difference between the black cat and the Bombay?

The common black European cat and the Bombay are very similar, but they have very notable differences:

And with this we are done. We hope you found it interesting to know the different breeds of black cats.