When a cat is born, it will instinctively taste its first food: mother's milk. That will be the only thing you eat until your teeth start to come in, something that will happen after about four weeks. Only then will his mother gradually stop breastfeeding him.

So it is important to know at what age do kittens eat alone, and what food can we give them to be ready when the time comes.

At what age do cats eat alone?

It will depend a lot on the race, but generally between a month and a half and two months they already have a strong enough jaw to eat. What happens is that at that age they are still too young to feed them depending on what, so it is recommended to offer them wet food to make it easier for them to eat.

In the event that you choose to feed them, it has to be a specific one for kittens, since the grain is much smaller. In addition, it is important that you do not bring cereals, since they can cause allergies.

How to know the age of a kitten?

To make this article more useful to you, I am going to tell you how to know the age of a young cat, since one of a week does not eat the same as another of a month.

Related article:
The growth of cats

What does the newborn kitten eat?

As we mentioned, the kitten as soon as he is born he will instinctively look for a mother of his mother to feed on her milk. This should be your first food, as it is the most important. It is the only one that has all the nutrients you need to have a good start to growth and, also, good health.

And is that breast milk is actually colostrum for the first two days, which is a very rich source of immunoglobulins (antibodies that protect against viruses, bacteria, etc. that cause diseases) (to give you an idea: in milk the concentration is less than 1 gram per liter, compared to 40-50g / l of feline colostrum). If the puppy does not have a chance to drink itEither because the mother has died, is ill or does not want to take care of it - something that would be very rare, by the way -, will have a harder time surviving.

What can I give a baby cat?

It is very common to find a kitten in the street, without a mother. My nephew found my cat Sasha in 2016 in a field, and I myself found my affectionate Bicho next to a health center. She was only a few days old; in fact, he hadn't opened his eyes yet; instead he was already a month old. But also, getting them out was not easy.

We had to be controlling ourselves a lot, trying not to get cold or too hot, and above all to eat well, otherwise they could have gotten sick. This is why when you meet a baby cat, it is very important that you give him replacement milk that you will find for sale in veterinary clinics or pet stores, and that you follow the instructions that are written on it to the letter, every 3-4 hours (except at night if he is healthy: if he is hungry he will let you know, do not worry).

If there is no way to find replacement milk, you can give him the following homemade kitten milk mix:

Make sure it is warm, about 37ºC. If it is cold or hotter, he will not want it, and that is not to mention that it would not be natural to give it to him like that.

How to wean a kitten?

Kitty should start eating soft solid foods around the third-fourth week of birth. At this age his eyes will be wide open, of a beautiful blue color, and he will walk with more and more security and confidence. Some are even encouraged to run, so they will no longer want to be in the crib / box.

If he is with the mother, she will take care of letting him know that she is no longer going to give him milk whenever he wants, that it is time for him to eat other things. But if he is not that lucky, then you will have to be the one who gives him milk and I think alternately. I'll tell you how I did it:

What does a one-month-old cat eat? 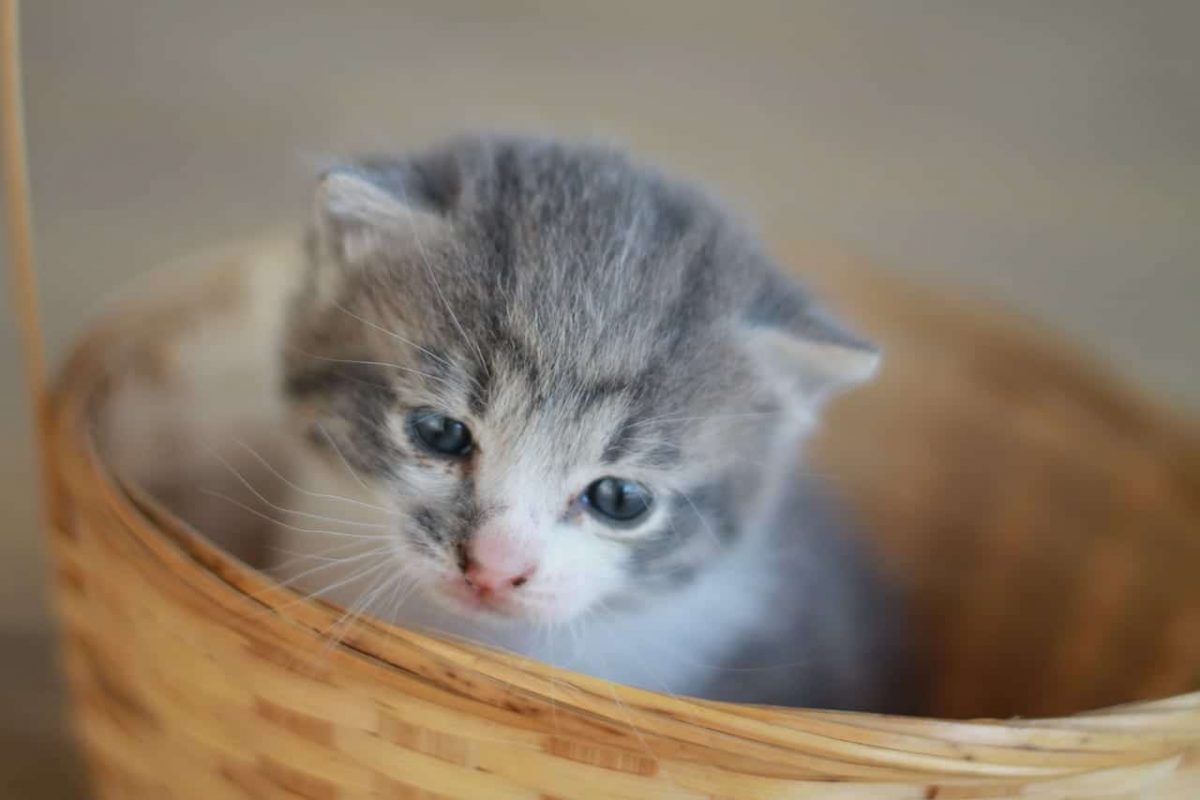 Taking into account that, in general, kittens begin to show interest in food one month after birth (although it may be the case that there are some who do not want to stop drinking milk up to two months), it is highly recommended that , after 30 days, you go giving them patés (wet food) for kittens. In order for them to also have a good development, I recommend that you choose a good quality one that has a high meat content (no less than 70%).

You can also give him feed soaked in replacement milk, but from experience I advise you to give him cans, as it will be much easier for him to eat them.

How to teach a cat to eat alone?

The kitten learns by imitating the mother and her siblings. If he does not live with them, other cats can be his teacher, but if this little one is the only feline you have at home, it is possible that at first you have to help him learn to eat.

If you find yourself in this situation, take a little food - almost nothing, like the head of a match - and put it in your mouth and then close it gently but firmly. On instinct, he will swallow and then most likely will eat alone.

From what age do I think cats eat?

It depends on what type of feed it is: if it is moist, in patés, you can eat from the third or fourth week; On the other hand, if it is dry, when you have to chew it, you will have to wait two months to start giving it, and even then you may have to soak it with water to make it easier for you.

Importantly, do not be in a hurry to separate the mother from the kittens. She will know when her little ones can stop drinking milk - normally, at 2 months, but it may take a little longer, especially if they are large breeds such as Maine Coon or Norwegian Forest-. From 3-4 months, kittens can eat dry feed without problems, since their teeth will finish developing completely very soon: at one year of age.

As time passes quickly, we advise you to always have your camera ready to capture those funny moments from the tender childhood of your friend.